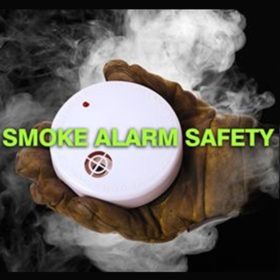 SMOKE DETECTION CHANGES: Chapmans are delighted to have heard that a long awaited date has been announced for the relaxation of smoke/heat alarm requirements in the private rented sector (PRS).  This is hot off the press and we expect the government to release the Statutory Guidance at some point before 1st March. In essence though…

We would always suggest chatting through the options in the approach taken and we certainly wouldn’t recommend changing a pre-existing mains wired systems for a wireless option.  Although we anticipate the initial set up cost to be cheaper for the wireless units, the units themselves are more expensive and so in the longer term the mains wired set up may be cheaper as the detector heads are cheaper to replace.  One of the real advantages of the wireless devices though, is the fact they can be more easily and quickly installed and there is less risk of damaging ornate cornicing and décor in a property. They would also obviate any requirement for visible trunking as well which all helps to enhance the look and feel of an investment property.

For more information on the requirements for your specific property please check with Chapmans.

The Landlords should either install smoke and fire detectors that meet the standard set by building regulations or be able to justify why a lesser level of protection is appropriate in a particular house.

REASONS WHY A LESSER LEVEL OF PROTECTION MIGHT BE APPROPRIATE COULD INCLUDE:

There should be at least:-

Please note a building warrant may be needed and regular testing and maintenance is required. Chapmans carry this out for our Landlords, however we do not get involved with the Building Warrants process and unless our landlord tells us otherwise we will work on the assumption that all necessary consents are in place.

**Please note that properties requiring an HMO License will be subject to the Local Authorities licensing requirements which may be in excess of the above.